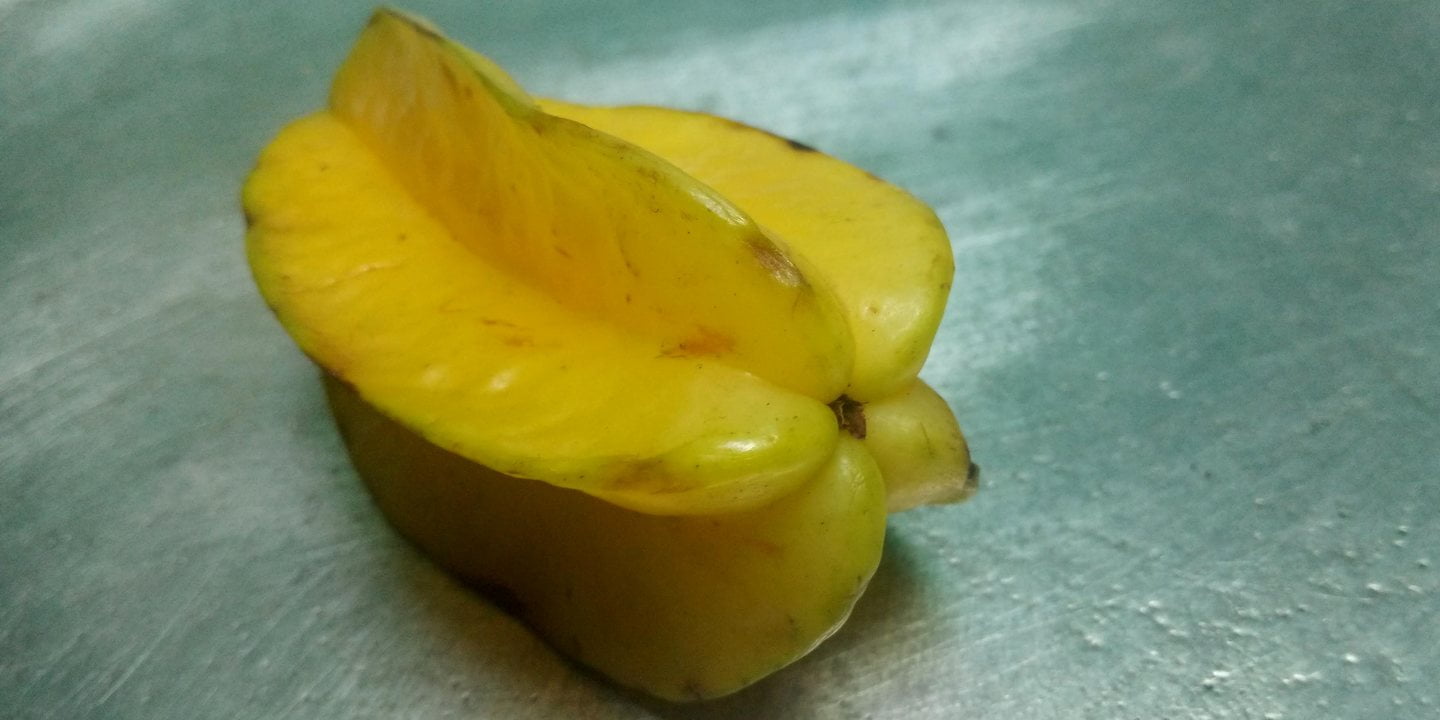 The carambola is more widely known as star fruit, for the obvious reason when you cut the fruit it looks like a beautiful star shape. These fruits are originally from Asia, but they are also now cultivated in most other tropical areas, like Mexico.

I was wondering which story I should tell about the carambola and myself, but honestly I don’t really have any to choose from. Sometimes I used to see star fruit in the supermarkets, but even though they were interesting to look at somehow I never bought or tasted one before. Since we have been here in Tijuana for a few weeks I kept on seeing it again at the market, but still didn’t buy one until the time came. 😀

What time? I don’t really know, just the moment when I somehow felt it was the right time to discover this fruit. It was labelled as carambola and actually has the same name in Lithuania, I didn’t know it was called a star fruit until I looked it up.

So, we picked one up, took it home, cut off a few slices and experienced our first taste of the mysterious carambola. The skin is hard and waxy, inside it has some seeds but not too many and the flesh is nicely golden yellow. To describe the taste it is hard, it’s a real mix of flavours. I could feel citrus, apple, pea maybe even the sweetness of grapes. So for sure it is a bit of a mixture, but a bit sour and acidic.

There are two main types of star fruit, a smaller more sour variety and a bigger sweeter one. Like any fruit is has a lot of varied uses, of course you can eat it raw straight from your hand, but the are also often eaten cooked. You can add them into salads or make dressings. Depending on the cuisine they can be eaten as a desert fried with sugar and cloves, mixed with apples or they can be used together with any other fried vegetables. They look great pickled or if you have too many you are might like to try making a jam which would be great with cheese. Star fruit also go well with seafood like fish and shrimp. I have never seen dried star fruit, but they can also be dried and eaten. In the shops I did see star fruit juices. So again just be creative about it, for sure it is a pretty fruit and looks very nice as part of raw desserts!

As we always try to take care what we are eating and what the values and benefits of foods are I searched for some information about the carambola as well. The fruit is extremely low in calories, but rich in dietary fibre and vitamins A, B and C. It has important minerals like zinc, phosphorus, magnesium, sodium and iron among others. All the elements in the fruit create antioxidant properties, boosts the immune system, increase calcium and iron absorption, helps with digestion and apparently can help to keep our skin, hair and nails healthier. So this is yet another fruits with natural super powers to improve our health. 😀

Be aware that you shouldn’t eat a lot of star fruit if you have any kind of problems with your kidneys (as I have, which is probably why I became very conscious to write about it) because it contains caramboxin, a toxin that can cause serious neurological effects if your kidneys can’t filter it out.

To be honest I probably won’t eat this fruit a lot in the future. I can’t explain exactly why but I didn’t enjoy it so much. I guess I wouldn’t mind it in a salad, or used in some curries, but not on its own. John really liked the flavor but he found the texture of the peel weird. As we are different we have different tastes, but in any case I would recommend to give it at least a chance because the star fruit deserves that much! If you already tried it let us know your own feelings about the taste.

Getting retro and analog on the beach at Klaipeda.

We are very happy to have a @seisuk desk! An adjus

It is only with the heart that one can see rightly, what is essential is invisible to the eye.

Cooking is an art and patience a virtue… Careful shopping, fresh ingredients and an unhurried approach are nearly all you need. There is one more thing – love

After a good dinner, one can forgive anybody, even one’s relatives